My two-year-old saw The Portable Nietzsche beside my bed, which bares Nietzsche’s image on its cover, and asked, “This, Karl?” (referring to our previous conversations about writer Karl Ove Knausgaard). Not expecting the question, I laughed abruptly, “No,” I said, “This is Nietzsche.”

“Oooooh, Nietzsche,” he said as if he knew exactly who Nietzsche is, and now clearly recognized him, which made me laugh more.

So our first conversation about Nietzsche, it turns out, is when you are two, I think to myself.

He belted out the name, “Neeee-chuuuuh!” a few more times because this new recitation brought pleasure to his lips, mouth and vocal chords, but also because he could tell how much it amused me.

Then I see what I had never noticed before, which my son in an instant must have recognized: on the book covers of The Portable Nietzsche and My Struggle: Book Two both men are photographed in black and white, both look with heads turned completely to the west with a determined, pensive gaze; both have their right arm lifted. Nietzsche rests his head on his hand, propped up on bent elbow like Rodin’s The Thinker; Karl Ove’s arm, and bent elbow, is lifted to bring a cigarette to his lips. Nietzsche has an impressive thick wooly mustache, and Karl Ove a modest beard. They both have tasseled hair because when you are a person who prioritizes, above all else, thinking and writing it will always take precedence over making sure each hair remains in place.

A couple weeks later we are traveling in Boulder, Colorado. I unpack my bags, set a couple books beside my bed, including My Struggle: Book Two of course.

Seeing this my son said, “Oh, Karl!” and then, “Where’s Nietzsche?”

“Nietzsche didn’t come with us to Colorado.”

And then uncontrollable joy comes over me and laughter that makes me rush to him, scoop him into my arms, squeeze him and kiss his luscious cheeks over and over again. A huge smile of confidence, half aware of his cleverness and how pleased I am with him, lights up his entire face.

Yes my dear, dear, boy, Nietzsche didn’t come with us to Colorado. 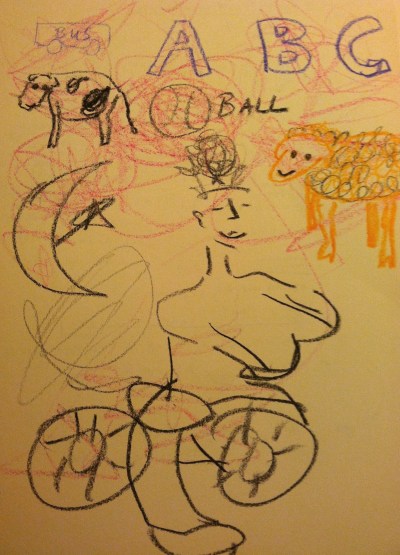